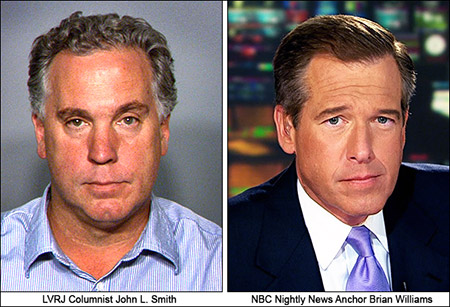 The reminders and parallels are everywhere you look. Take, for example, the recent incident of Brian Williams and the tale he’s been telling about his helicopter getting hit by a rocket-propelled grenade in Iraq in 2003. Except that it never happened. It wasn’t true. His helicopter never was in danger and was 30-minutes behind the helicopter that actually got hit. How do you “conflate” a story like that. (BTW, just to be clear, the definition of conflate is to combine two or more things – ideas, stories, events, etc. – into one.) But how do you conflate something when one of the things actually never happened? Anyway, moving on …

So what’s the parallel here? Integrity.

It’s all about representing the truth and earning the trust of citizens and the credibility as to who you are and the veracity of your stories. It’s stock-in-trade for journalists. If they misrepresent, if they “mis-remember,” if they report on something that actually never happened, they lose credibility, they lose everything.

Brian Williams lost credibility in a pretty big way by telling this tall tale of a harrowing experience of nearly being shot down, which actually never happened. John L. Smith lost credibility in a pretty big way by losing a $15 million libel suit after writing a book that included details about billionaire Sheldon Adelson that just weren’t true. And Adelson didn’t like that. So he sued Smith and the book publisher for libel. $15 million in libel. Enough to get a lot of people’s attention.

But while Williams is now off he air for a minimum of six months, suspended for his errors in fact, John L. Smith writes on and on and on. Watch how the Williams thing goes; already we’re seeing more tall tales from him bubbling up. Prediction: he’ll be gone the full 6 months and then some, and won’t return in the same role he had. In fact, I can’t imagine a scenario where he comes back to be the nightly voice of the NBC Nightly News. He’ll be a special reports or special projects guy, a diminished role for sure.

For those old enough to remember, imagine this kind of a story being pinned on the venerable Walter Cronkite over at CBS. He was a mainstay of millions of people’s evenings. The nation drew and exhaled its collective breath on the news he reported nightly. He was there to convey the terrible, tragic news about President John F. Kennedy’s assassination. There was no more respected face in journalism. Imagine him trying to cover his tracks over a story such as Brian Williams is trying to squirm away from. It would have been unthinkable.

How low have our standards gotten? Journalism used to be a respected profession. When you’re a “journalist” like John L. Smith claims to be, and you’re given a public pulpit to write commentary on a regular, frequent basis; and if you got convicted of a DUI, if you lost a $15 million libel suit, if you’ve been exposed for the kinds of shenanigans that have gone on in Smith’s life (just scroll through other posts in this blog to see what I’m talking about) you’d have been bounced on your butt out the door and had it slammed behind you.

Not so much anymore, right? Why does John L. Smith get the public platform he gets, influencing readers as he does by being given that opportunity to write opinion pieces? Why is he allowed to continue in his role? Shouldn’t he at least been suspended from his job for six months? Shouldn’t his editors have questioned whether or not a guy like him should be representing the newspaper? Shouldn’t the public be more aware of what’s gone on while he’s been in this highly influential role?

Just my opinion. But I’m betting a lot of others would whole-heartedly agree.