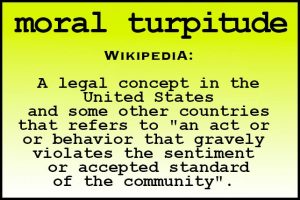 Let’s forget the DUI, let’s glaze over the bankruptcy, forget the personal agenda, not get into the messy divorce, the whole Sheldon Adelson/Las Vegas Review Journal episode …

I am so sick of John L. Smith’s agenda, who says he resigned/was fired from the LVRJ for not being able to write about it’s current owner, Sheldon Adelson.

John L. Smith’s authoring career speaks volumes as to the impact he has in the Las Vegas area. His books selling on Amazon start at .10 cents.

This is who KNPR is giving voice to: a man whose books start at .10 cents, has a DUI and a bankruptcy in his past and who is deeply rooted in the Las Vegas, good ol’ boy system.

These two disreputable men — retired Las Vegas Metropolitan Police detective Tom Dillard and John L. Smith — who came across my personal radar when I was testifying in court proceedings as Dillard began spoon-feeding John L. Smith false, defamatory and damaging information about me, which Smith then turned around and published in the LVRJ. Dillard even went to the extreme by personally threatening through intimidation my son, who was in grade school at the time.

John L. Smith was greatly influenced by Tom Dillard. He wound up writing five untruthful articles about me in the LVRJ, one of which is still available today. (This is why I’ve labeled him as the “untruthful” reporter.) It was unprecedented for John L. Smith to write five articles that focused on me. To say Dillard’s background and professionalism is sketchy is an understatement. As a result of Dillard’s lackluster behavior, several million-dollar payouts had to be made (that’s public taxpayer money, by the way) to defendants in cases who were wrongly and unjustly accused of very serious crimes, up to and including murder. He pinned cases on innocent people and ruined their lives. They never recovered.

Let’s look at just one example of Tom Dillard’s past: the multi-million dollar payout the state of Nevada made to John Harrison West, in which Dillard withheld exculpatory evidence that would have exonerated him of the murder of Airman Beth Lynn Jardine.

Fast-forward 20-some years, the actual murderer was found by the excellent work of the Las Vegas Metropolitan Police cold case unit.

Nice work, ex-Det. Dillard, a low-life scumbag in my opinion, who just bought a new house, by the way, on the other side of town — the Centennial/North Las Vegas area.