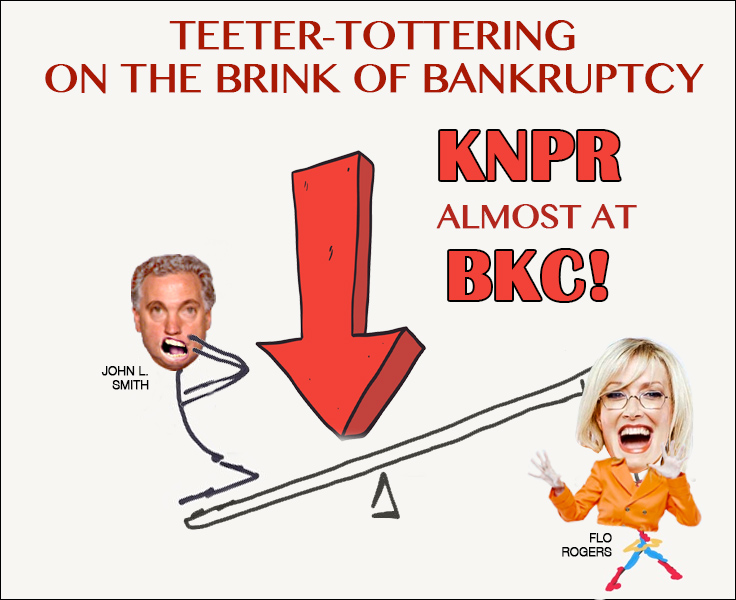 Along comes an item from the Las Vegas Review Journal this past week regarding recent financial troubles at Nevada Public Radio in which the interim CEO, Jerry Nadal, admitted that the station was on the brink of bankruptcy.

This admission comes only a month after the National Pubic Radio member station announced that KNPR radio CEO and President, Flo Rogers, was stepping down amidst what the station called “severe cash flow issues.”

All this comes as no surprise to me. In fact, I wrote about this more than a year and a half ago. Flo Rogers gave the man I have labeled the “Untruthful Reporter” a voice on the radio station she was in charge of at the time (as president and CEO of KNPR) by hiring John L. Smith to do commentary pieces. JLS walked away from his job at the LVRJ after billionaire Sheldon Adelson bought the newspaper. Smith didn’t think he would get a fair shake from Adelson at the LVRJ. They had a little history. Adelson sued him previously for $15 million after Smith wrote and had a book published that contained factual inaccuracies about his boss. That would make me nervous, too.

So John L. Smith hops over to KNPR to continue his stream of untruthful reporting. I label him as that not just because of the book incident with Adelson, but also because of the inaccurate and untruthful reporting about me in connection with a court case I was involved in years ago. (Ancient history, by the way, but somehow it’s suddenly rising to the top of Google search results when you search my name.)

And that’s not all. John L. Smith has a history of looking the other way when facts don’t fit his narrative. Just take a look through this website and you’ll see what I mean. So it’s no surprise that the addition of Smith to the KNPR lineup did nothing to boost revenue at the station. Smith is not what you call a revenue generator. All you need to do to get a handle on understanding the valuation of John L. Smith is to know that most of the books he’s written start at .10 cents on Amazon.com and go up from there. Garrison Keillor he’s not. As I said then, and I’ll say it again now, John L. Smith “has ceased to be relevant in the Las Vegas metro area – if he ever was.”

If this is the kind of decision making that exemplified Flo Rogers’ tenure at KNPR, no wonder they were bleeding money and on the brink of bankruptcy.